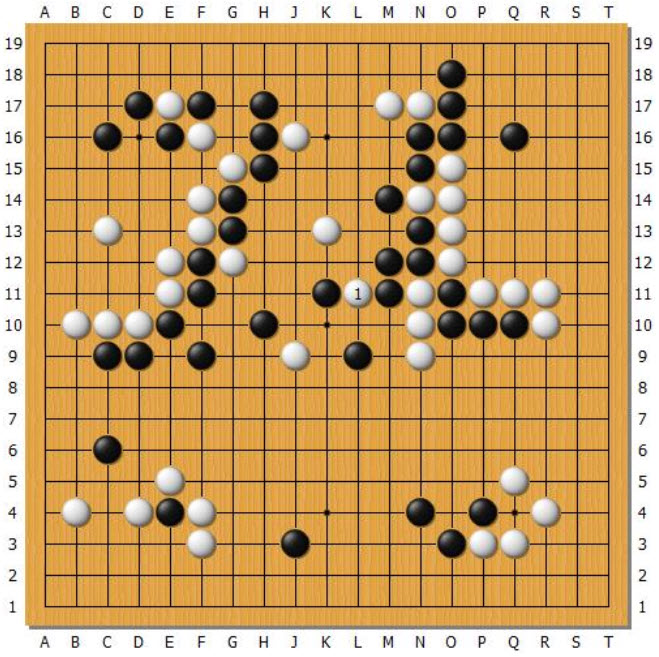 Why I want to share Monte Carlo algorithm in KKStream

Alpha Go has won 4 games against Lee Sedol who is a world class Go master. I knew this would happen someday but did not expect it so soon! Now almost all software guys know names of the 2 algorithms: neural networks and Monte Carlo. For programmers, it’s not difficult to get a rough idea of how hard it is to play Go with brute force methods. And I always think it’s a good idea to help others explore different algorithms. So I decided to give a talk about MCTS in KKStream.

What happened to computer Go

I was a ~1d Go player in 2000. There was a very good computer Go A.I. “Hand Talk” during that years. But even I could beat it easily. But things started to change. This chart presents the rating of Go program on KGS server. Now the program can beat me easily :). 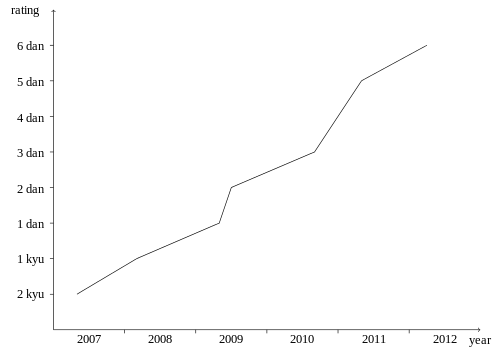 In my opinion, there are 2 major problems in computer Go:

There are too many branches to build a game tree. Considering there are 3 states in each position (black, white and empty), there are $3^{361}$ possible games! And the size of the board is not considered yet! Professional players play games on a 19 x 19 board. But the general rule is able to work on boards with different size, e.g. a 38 x 38 boards. The strategy would be changed to play on the larger board. But world class players will still be world class while the larger game tree needs Moore’s Law.

Go players play game with some kind of sense. Go players usually play games with their sense. Even professional players would state: “I chose the move because I thought it would be interesting”. Besides, good players can guess the potential of stone groups, but it’s difficult to express it in algorithms (I don’t even know how).

Monte Carlo is a heuristic algorithm which was developed to solve the first problem: since I am not sure which one is the best, I wager on the most promising one! (Monte Carlo methods are also developed in many other areas, e.g. photon map of computer graphics)

I use a board game ‘reversi’ to demo the algorithm because of many advantages:

The algorithm is about how to search in a game states tree. In every state (tree node), a player can have several different moves (branches). There are 4 steps in each episode of Monte Carlo algorithm:

The structure of a state in reversi looks like:

During back propagation, we can update values base on any different formula. The formula I use to demo is “Upper Confidence Tree”. The variables are:

There are 2 features for this formula:

Combining the 2 features and tuning the constant factor give us better balance on Monte Carlo algorithm. Keep optimizing the game tree till we are satisfied. Then choose the child state which has been visited most! It’s good enough cause we invested most computing powers to make sure it’s good. It’s also stable enough cause we invested computing powers on the other states and they are no better.

How to implement it in C++

The core of MTCS for every episode: select, expand, simulate and backpropagate. If we need a stronger program, increase episodes. More episodes make the program more stable!

Traverse the game state tree from current state till we reach a leaf state. In each depth, select the state with the highest value.

If the game is not ended in the selected state, enumerate its’ child states and pick one. Let a new state has maximum value to make sure all states are visited at least once.

Play a random game and return the winner.

Update values of all states along the visited path.

Demonstrate the values of states

I also implemented a program to demo the value function (UCT). Keep evaluating the initial states and observe the values, the values of 4 possible moves will become close eventually. (cyan text for the best value, red text for most visited state)

One of the reasons I chose reversi is “there are simple strategies to follow”. But why? I have a simple strategy for this game: try to occupy the side/corner positions before the opponent. Because they are hard to be attacked, especially the corner. Now I have introduced the algorithm without any strategy (domain knowledge) and that is why I am excited: it’s for general purpose!